Evolution Of The Over Arm Bowling Action Bowling Used To Be An Under Arm Action Up until the 19th century, bowling under arm was the norm for bowlers. This of course made batting quite different than it is today. For one, batsmen didn’t need to wear helmets. The slower pace of the ball and lack of bounce meant there was no chance for bowlers to deliver bouncers and no chance of batsmen sustaining head injuries. This wasn’t the only difference- cricket bats were made in a completely different shape than how you find them today- they started out looking more like a modern day hockey stick before evolving into a shape that resembles a canoe paddle. 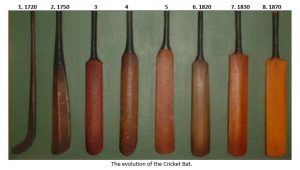 Cricket bats were shaped more like hockey sticks and paddles before evolving after the introduction of over arm bowling.

It Was A Woman Who Introduced The Over Arm Bowling Technique Because of the lack of pace and variation that came with bowling under arm, batsmen were able to stay in for hours at a time, reading the ball and smacking it all over the ground- bowling became a daunting task and it was increasingly difficult for bowlers to take wickets. But nothing changed until Christina Willes, sister of England Cricketer John Willes who became frustrated with bowling after constantly snagging the ball on her skirt decided that the best way to stop this from happening was to throw the ball over arm. Her brother John saw this and decided to try it out in a county match in 1822. The umpire called a no ball and John left the field in fury, got on his horse and never played cricket again. The story spread like wildfire and by 1826 Sussex bowlers were regularly bowling over arm and umpires didn’t know how to stop it, so in 1828, the rules were changed to include over arm bowling and that is the story of how the bowling action is what it is today.